The woman called Folly is brash,
she is naive and does not know anything.
So she sits at the door of her house,
on a seat at the highest point of the city,
calling out to those who are passing by her in the way,
who go straight on their way.
“Whoever is simple, let him turn in here,”
she says to those who lack understanding.
“Stolen waters are sweet,
and food obtained in secret is pleasant!”
But they do not realize that the dead are there,
that her guests are in the depths of the grave. 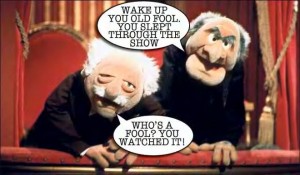 If I could be a Muppet, it wouldn’t be Kermit, Gonzo, Fozzie, Animal or Rizzo. Maybe Ralph. But, no, I didn’t want to be any of those. I wanted to be one of the hecklers. I’m not sure what pulled me in about them, but I thought they were hilarious. Mr. Waldorf and Statler had this way of not liking anything and laughing about it. “Wake up you old fool. You slept through the show.” “Who’s a fool? You watched hit!”

If you haven’t watched any of the Muppet Show in a while, it’s worth a look. I think.

Yesterday we learned of the price of mockery. Today, we see someone who mocks the passersby. Folly. She is brash, always trying to stir up trouble. Trouble my friends, with a capital T. She sits at the door of her house, hurling insults at those who pass by.

It’s as if she is Mrs. Waldorf or Mrs. Statler. Even when there is something good, they have to find something to insult. It doesn’t matter what it is. The point isn’t a point. She isn’t generally making a point. She’s trying to stir up trouble. She isn’t trying to prove anything, just trying to draw you in to make you look like a fool.

DO NOT WASTE YOUR TIME! It is completely pointless to engage with people like this. They are simply trying to do things that make them feel powerful and strong. It doesn’t mean anything. Their universe is small and contains only them unless they can pull others into their orbit. This is not the star you want to be orbiting. It is short-lived and explosive. You can’t predict anything about them.