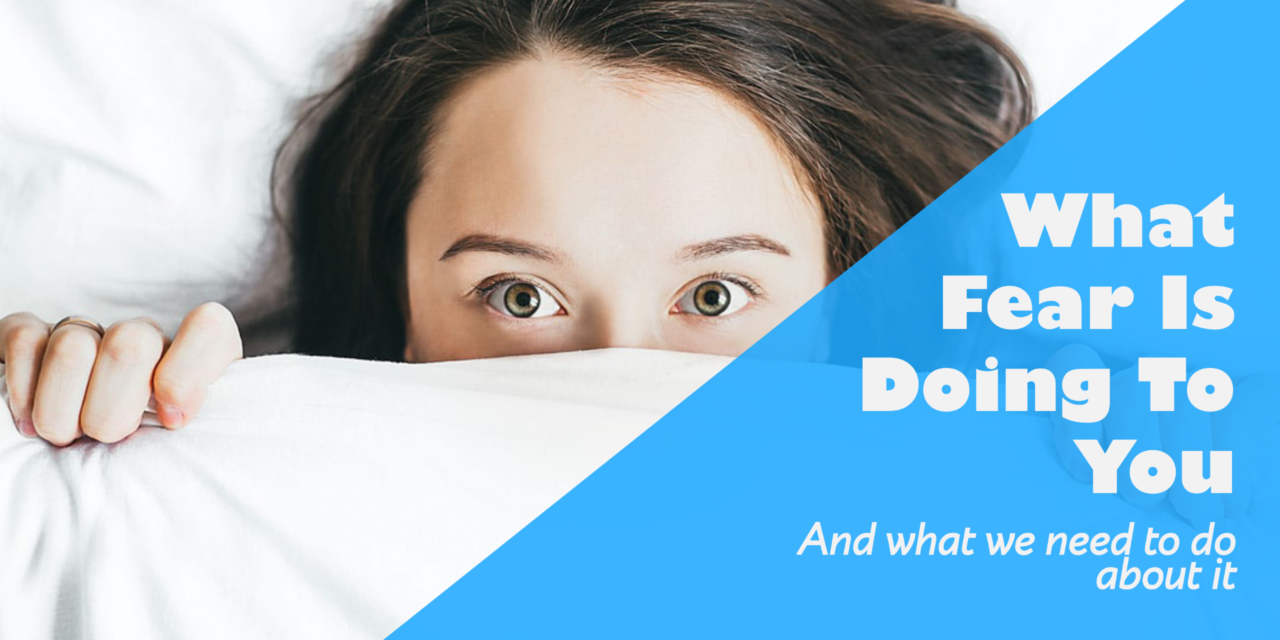 Several times over my years here at SixEight Church, I have taught about what fear does to the brain. In short, your amygdala is responsible for dealing with processing a lot of information like memory, decision making and emotional responses. So, this almond shaped part of your brain is able to trigger different parts of your brain directly like the hypothalamus which ignites the pituitary gland. And that is where your nervous system connects with the endocrine system which is responsible for releasing hormones into your blood stream.

Are you with me so far?

Well, when you’re afraid, there are a few chemicals that get released into your bloodstream. Adrenaline and cortisol which also set about the release of other things like glucose, giving your blood a sugar rush to help you escape the danger or take it on.

In my non-scientific explanation, fear short-circuits the brain and your body. This is by God’s design for our protection. When you’re in a forest and it’s windy enough to cause a trees to start falling near you, you don’t need the rational part of your brain to kick in to try to evaluate whether or not you are in danger. You don’t need to stop and do math related to distance, wind velocity and your rate of speed. You just need to run for your life. The chemicals released into your bloodstream increase blood flow to your heart, lungs and muscles and away from less immediate needs like your digestive system.

These chemicals have a purpose, but they also have some negative aspects. For example, they can make you intolerant, irritable, uncreative, critical, impair your memory and cause you to make bad decisions.

We see this at play in the world around us to the nth degree. People are afraid. For many different reasons. Some fear because of the virus, others for their jobs, others for racism and damage that has been done throughout history to people of color, others for the tension and in many cases, trauma that is being caused by protests and riots. There is fear about when/if school is going to start up and what that’s going to look like, fear about the division in our country, fear about the coming election, fear that our preferred candidate won’t get elected. Fear that you might read this article and get mad at me for something I said. Basically, every where you turn, fear.

We were living in a state of fear prior to the pandemic. But the pandemic escalated our sense of fear. Consequently for the past 4-5 months, we have been making decisions with fear chemicals coursing through our veins and brains.

Remember when all this started, how there were a couple of weeks of solidarity? “We’re all in this together” was our mantra. People were looking out for their neighbors and we had this esprit de corp for going through an historic event together. Lots of people were afraid. But many of our leaders and the media were doing their best to keep us positive.

But, and this is what really bothers me, that all changed. We stopped working the problem together and leaders and the media got back into their fear-mongering ways. (No, they never really stopped for that brief tim, but it was less.) Political leaders, media giants, basically anyone with a platform started using fear to get us to agree that their stance was right. That’s what gets me. The majority of humanity was already living in some state of fear and uncertainty and they added to it in abundance. And still are.

But why? Because fear short circuits the brain. You don’t think rationally when you’re afraid. And most of our leaders don’t want us to make a rational decision, they want us to make their decision. Consequently our world is full of extremely intolerant, irritable, critical, impulsive uncreative, memory impaired individuals. People making decisions without the benefit of the slower, more thoughtful part of their brain.

We literally have millions of people running around jacked up on adrenaline, cortisol, epinephrine and norepinephrine. Some have been in hiding for months, others have had their sleeves rolled up and ready for a fight.

[begin soap box] I get that you might be angry. I have been. But, maybe instead of being angry at one another and anyone who doesn’t agree with us, maybe we should redirect our anger. Maybe we should be upset at the media giants who propagate the message of fear. The people on all sides who use their platforms for harm instead of good. If you’re reading this an you have a platform, why not devote the majority of your airtime to the good in the world? Well, I know why, because fear sells. When people are afraid they make impaired financial decisions too. So you get wealthy at the expense of our mental health. (By the way, this is why I was working on a show called about good news a few years ago. This was long before John Krasinsky did his “Some Good News” show and I can prove it. (People who know me are probably rolling their eyes at another one of my ideas that I had but never acted on, then someone else did and it went viral.)) 🙂 [/end soap box]

So, what do we do about this? Fortunately there are a few things.

1.) Filter: About a month ago I stopped taking in any news. As in none. We haven’t had the news channels for a while. But, I stopped watching local news. I unsubscribed from them on Facebook. As a pastor, I’ve always felt I needed to know what was going on, so when people ask me about it, I’ll have had time to think about it. But, it was too much. Too much hate. Too much negativity. Too must disrespect. There’s been no such thing as human decency on the airwaves for a long time. But recently, it’s been friggin’ ridiculous. Shut that trash off. Seriously. You don’t need that kind of rubbish in your mind. If I wasn’t a pastor I would use much stronger language to describe it. Maybe I should. That stuff is just some frumpy horse pucky.

“But what about Facebook? What about people who are my friends who are sharing too much of that?” Snooze them for 30 days. I have. People on both sides. To be honest, I’ve snoozed way more people whom I would probably agree with than those with whom I disagree. Some people share things because they don’t have the courage to say those things in real life. Others share things to get likes and attention like some kind of a hot-topics bandwagon you can jump on to stroke your ego. If you miss out on something that actually happened to them in real life and they ask about it, muster up a little courage and say, “I’m sorry I missed that. You were were just sharing too much negative stuff and I needed a break.” No, I’m not advocating creating an echo chamber. But, I am advocating, turning off the fear faucet. Start filtering it out of your life for the sake of your mental well-being.

“Isn’t that selfish, to cut others out of your life for your own mental health?” Like the oxygen mask scenario on a plane, what good are you to rationally help a friend going through a crisis if your mind is in a constant state of crisis? We need to unplug from the crisis if we’re going to find peace. We have to turn off the pandemic faucet if we’re going to stop the flood of chemicals that is destroying our house.

2.) Evaluate. Once you’ve started to turn off the flow of negative, fear inducing information and you literally start to balance out, evaluate your life. I’m guessing you’ll look back and see some damage. Some that you caused, some others caused and some for whom there is no one to blame. Own as much as you possibly can and then some. Refuse to blame shift and make yourself the victim. Seek to restore whatever was damaged. Forgive. Recognize everyone is maxed out and literally not thinking clearly. Determine to be a part of the solution, not the problem.

3.) Stories. Stories release chemicals in our brain like Dopamine, Oxytocin and in some cases, Endorphins. Dopamine which helps with focus, motivation & memory is released in any story, especially stories with cliffhangers. Oxytocin which makes us more generous, trusting and likely to bond with others is released when we empathize with another person. Endorphins which helps people relax and become more creative and focused are released when we laugh.

So, read a good book. Watch a good movie. Tell a story and ask others to share their stories. Retell old stories that you love. Work on telling a new story that you’ve never told.

This, by the way, is why I’m trying to get some traction with the hashtag #overwhelmthenegative. We have a ridiculous amount of power if we choose to wield it. We can bring an end to the major negative news organizations by simply refusing to support them and supporting other, more positive sources of good news. Then we can flood social media with good news. We take away their power and replace it with good.

I’m not trying to pressure you to do something you’re not comfortable with. But I do want to challenge whatever has created this new standard of safety. We will never be completely safe from everything. We live in a broken and fallen world. The only true safety will be found when God restores everything.

From where I sit, the potential danger to our society from our isolation is much more dangerous. I’ll write more soon, but when we’re isolated and obsessing about an idea, bad things happen. That’s how the devil wins.

Maybe it’s not big groups or even small groups. But there has to be someone you can see in person. Someone you can hug. Someone you can tell stories to. Someone who can make you laugh. The State of Washington says groups of 5 are okay. Maybe start there? Maybe get a few people from church together outside?

But there is only one fear that’s supposed to dominate our mind, that’s the fear of the Lord. When we have a proper understanding of who God is, everything else fits better in the place it was designed for. And God has never not been in control. God is not freaking out. God is not scared about what’s going on.