So, I just finished watching “Remember the Titans” for the 10 thousandth time and every time I watch I’m reminded of what a great movie it is. If you’ve been listening to the podcast, you’ve probably heard Kevin & I talk about this at some point. If you don’t remember, there was one choir tour we were on where Kevin & I watched this movie (it had just come out on DVD) almost every night in our host home with our host family. By the end of the tour we pretty much had the movie memorized and several of us had adopted names from characters in the movie. 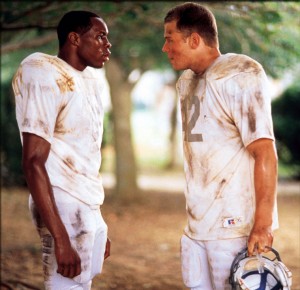 The second reason it’s great is because of the Leadership lessons that can be learned. It obviously took great leadership to lead a team through such a trying situation into a victorious season. There are examples of great leadership throughout the movie, but there are a couple the really stand out to me.

“You may not like each other, but you will respect each other…maybe someday we’ll learn to play this game like men.”

How many times have you wished the people you are working with would “learn to play this game like men”? I certainly know I have had that thought. If we could just get beyond some of the childish, all about me ways of thinking, we’d get so much further down the road. If it wasn’t always about “ME,” “WE” could go so much further.

Do you remember the Scene? Julius and Gary are having a confrontation about playing as a team and Julius calls Gary out. He calls him out about not getting on his white buddies to block for Rev. Then he says that Line, “Attitude Reflects Leadership – captain.”

Have you come across this in your ministry? You start noticing a certain attidue, whatever that might be among the people in your ministry, when you suddenly realize that it’s because it’s an attitude you have been exemplifying to your people.

“You call this game fair, or I’ll go to the papers, I don’t care if I go down with you…Dig your own grave”

There will be times in our leadership careers when we will have to make decisions, the right decision, that many or even most others disagree with. It might be huge, it might be small, but for some reason people have chosen sides and you have to make a stand for what’s right. You may be taking yourself down, you might be diggin your own grave, but you know it’s right. The result might be positive, you might go down, but it’s still the right decision and you needed to take a stand.

Whatever your position, there’s a wealth of leadership knowledge that can be gained from watching “Remember the Titans.” If you haven’t seen it, it’s been a while, or even if it was last week, go rent it and watch it. I’m positive you’ll find something in there to encourage you as well.

Pre-Leadership? (Why who we are before we lead is important)

Lessons in Leadership from Boston Rob